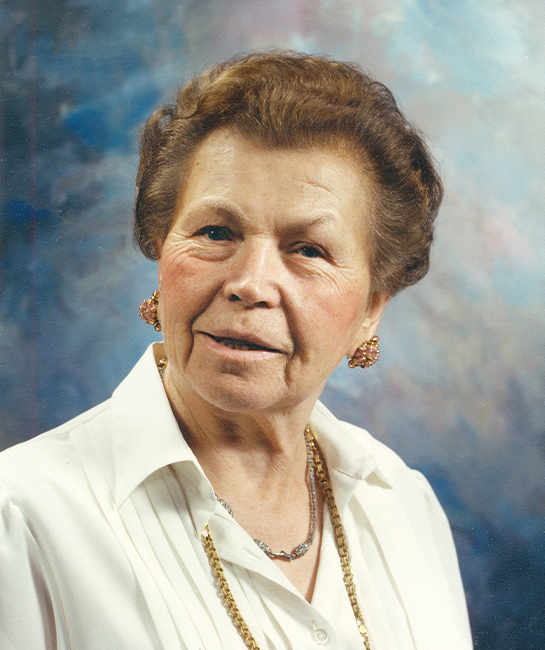 The Nelissen family can best be described as socially aware and very committed. Maria Nelissen, the eldest daughter of the founder of Nelissen Steenfabrieken and wife of Miel Bertrand, was a lady with a big heart. Her generosity spoke volumes. Throughout her life, she distributed money to charities, parishes, convents, nuns, monks, and priests. But she never expected anything in return. Quid pro quo never crossed her mind.

As generous as she was to the church and the parish of St. Michael in Kesselt, she was equally generous to her nieces, nephews, and other descendants of her widely branched family. She herself had no children. So, Auntie Maria, as she was known and addressed in the Nelissen family, was the rich aunt? “Without a doubt,” remembers Gaston Nelissen, who had to call Maria ‘auntie’. “She wasn’t stingy with her money. She’d gift money to family members on their birthdays. She also showed her generosity at family parties. She was a beloved aunt. A woman after our own hearts! We had a great deal of respect for her and still really miss her a lot.”

Devotion to the church

“She was quite a devout Catholic,” Gisela Gevers says of her aunt. “She paid annual masses for dearly departed people in her family and others. She was in close contact with convents, nuns, and priests in Kesselt and far beyond, giving them generous donations. She transferred money to support missionary work in India. She was always ready to help and had a great sense of justice.”

To the tax office

She was punctual in everything she did and kept track of it all. “She wrote down every mass she paid and kept a receipt,” Gisela Gevers adds. According to Gaston Nelissen, she had written all the expenditures in a book. “She kept them for tax purposes. Later, I took it to the tax office, and handed over a bag full of papers showing the donations, much to the surprise of the tax inspectors. This way, they could see where all the money from her bank account was going,” he adds.

The parties that Auntie Maria regularly organised for the family were legendary. “It was a role that was tailor-made for her. Her mother (Anna-Maria Haesen) also held family parties. “The apple doesn’t fall far from the tree,” Gisela Gevers confides. “She had between 10 and 15 relatives visiting her at home almost every fortnight. And the main dish would be rabbit with plums. Like her mother, she was the glue that held the family together.”

Auntie Maria loved her father’s brickyard. Her husband, Miel Bertrand, and Mathieu Nelissen, Alfons’ eldest son and father of Gaston Nelissen, headed the brickworks in the name of the second generation of the family. “Auntie Maria worked in the accounting department,” says Gisela. “She did everything meticulously, like checking the accounts, for example. She discovered things that had even escaped the staff in the accounting department.”
Actions
Stories
Did you know…