The Gosselies-based Bruyr-Partners is a multidisciplinary firm that blends architecture with engineering. The cross-pollination of these two disciplines begins with the very first sketch. That’s what makes it possible to achieve the perfect harmony between aesthetic and construction-related elements.
Taking the desire to draw as much inspiration as possible from the current context as its starting point, the firm bases its approach on know-how and craftsmanship to create sustainable, multifunctional architecture that has the potential to fulfil a different purpose in the future. 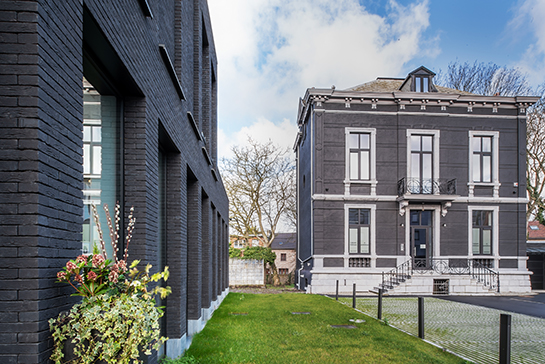 Greater than the sum of their parts
The health centre in Mont-sur-Marchienne is the perfect illustration of what the firm is all about.
The project was the result of an extended dialogue with the building owner and would initially consist of the conversion of a regal mansion into a chemist. The final project is proof that the designers did full justice to the context at hand. The chemist is located in a newbuild on the street side, which highlights the elegance and austerity of the transformed mansion. The semi-public reception area creates an intriguing dialogue between old, new and the street.
Thibaut Bruyr: ‘The existing building has a few unique qualities, so it boiled down to creating a whole that would enhance the original building, but also be capable of standing alone, so that old and new would be greater than the sum of their parts. However, we didn’t think that the mansion’s structure was right for the intended project. The idea of setting up a medical practice stemmed from that concern. In other words, the project was expanded and improved.’

Black brick creates strong identity
The new chemist, the mansion and the wall delimiting the plot and private car park create a lovely monochrome whole, with black as the dominant colour. Thibaut Bruyr: ‘Opting for such a dark shade showcases the neoclassical architectural elements of the old facade, which helps enhance the Belgian Blue Stone. That creates a strong identity.’
The newbuild and the wall make a huge impression thanks to the glued masonry. A decision was made for a Nelissen brick in ‘Waal size’ (length 210 cm x height 50 cm), laid in stretcher bond.
The glued masonry reinforces the uniform look of the simple, understated building. The absence of mortar joints enhances the monochrome quality. And the simple, clean details evidenced by the newbuild make the mansion’s architectural decorative elements more striking than ever.