A dignitary and a benefactor in the brick village 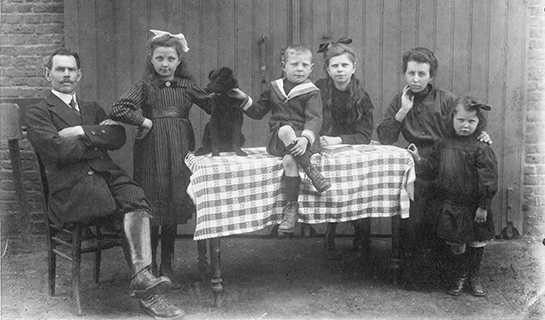 Although Alfons Nelissen was busy setting up and expanding the brickworks, he still found the time to make a name for himself in Kesselt, his home village, which back then was home to just under 500 people.

As an industrialist, dignitary and benefactor of the parish, he considered it his moral duty to take the lead in local social life. He was one of the founders of the royal band of Saint Michael, the patron saint of the parish of Kesselt. He was also the first in the village to own a car and a bicycle. The latter became such a passion that he founded a cycling club in the village. The cycling club and the band saw the light of day in café Nelissen. The village was close to his heart and he was committed to church life, which is evident from the fact that he was chairman of the church council for many years.

A typical Maasland sense of humour

Every first Sunday of the month, he chaired the church council. "He was always the only one to light a cigar," remembers Mathieu Van Deurzen (82), who was also a member of the church council. Alfons was a serious man, but certainly not a boring one, as Henri Rutten, former treasurer of the church council, testifies. An example?    "In those days it was customary for the deceased to be buried wearing a gown," he says. "Once Alfons drily remarked that the gown had no pockets. Look, he can't take anything with him to the afterlife!" Julien Nelissen, Alfons’ youngest child and his only surviving descendant, confirms his father’s typical Maasland sense of humour. He could take a jab like no other. He loved joking around. For example, when he left the church after Sunday mass, he made many a woman and man laugh, Julien Nelissen says. He is the youngest son and the only surviving descendant of Alfons Nelissen and Anna-Maria Haesen. 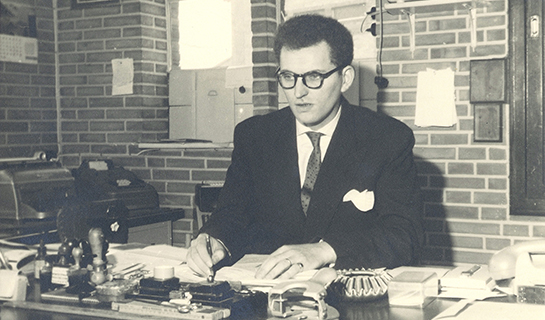 Chairman of the church council

As chairman of the church council, he made donations. For example, he had a brick main altar built at his own expense in Saint Michael's Church. It still stands in the parish church today. When he and his wife Anna-Maria celebrated their 60th wedding anniversary, he had a bell cast. He gifted the heavy church bell to the parish. The bell is the only one that still hangs in the church tower today.

Alfons Nelissen was social and ambitious. He had the first car in the village. And he was also the first to own a bicycle. It inspired him to start a cycling club, which he called ‘Rode Mutsen’ (Red Caps). Not only the ‘reds’ united into a bicycle club - the name does not refer to the socialists, who are also commonly known as the ‘reds’ - the ‘blues’ soon followed suit. The cyclists wore a kepi with a red band. ‘Rode Mutsen’ was a club for men only, who cycled around the area on Sundays. You could say they were cycling tourists avant la lettre.

Bricks for the school

Alfons Nelissen and his descendants also helped the local kindergarten. In 1959, the kindergarten and the parish hall were housed under one roof. The building was dilapidated and needed to replaced. And that is exactly what happened. In 1960, a new kindergarten was inaugurated with a big village-wide celebration. The parishioners had collected 100,000 francs, which was a lot of money at the time, to erect this new building. Alfons Nelissen knew that you can't make bricks without straw. So he rolled up his sleeves and donated the first 1,000 bricks for the new kindergarten and the adjoining hall. He charged the factory price for the remaining bricks. After all, this project was not about personal gain.
Что нового