Den Boschwachter is a residence consisting of 21 apartments. This new-build is located in the heart of Koersel, a stone’s throw from Kerkplein, the church square. The name of the project, Den Boschwachter, means ‘forester’ in Dutch. Indeed, this complex, which is now home to 21 families, used to be a forester’s residence.

Before Den Boschwachter was erected, Kerkplein in Koersel was home to a few shops and apartment blocks, as well as a large vacant plot, where the construction company ABP built 21 new apartments. A number of conditions were imposed before the new block was built: the footprint of the project had to be proportional to that of a small village centre. It was a challenge that the architectural firm Atech Architecten was only too happy to take on. 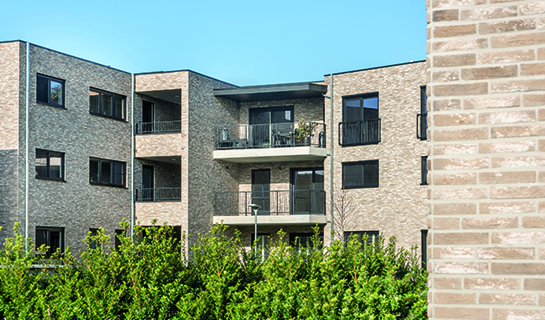 “I have a feeling that people tend to knock on our door for complex assignments,” says Pieter Vanhees, who manages Atech Architecten with his father. “What was so difficult about Den Boschwachter was the fact that we had to maximise the surface area without turning it into a massive block of apartments.” And Atech Architecten managed to achieve that in several ways.

Den Boschwachter lies on an organically shaped plot. “That means that the plot does not have very straight lines,” says architect Vanhees. “We used that feature to the full in our design.” Another striking feature of the project is that part of the residence consists of two floors, but towards the corner of the plot we created three floors. 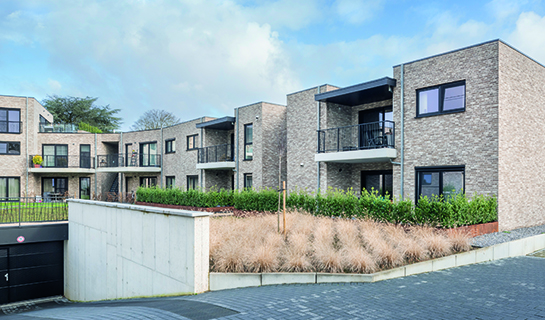 Pieter Vanhees explains, “We built mainly on the outside of the plot, so that the inside still has a large open space that we have laid out as a park.” This green character provides beautiful green views and enhances the project’s value for money. “This concept has enabled us to get the most out of the buildable area and still retain a piece of greenery in the core of the complex, resulting in an open design.”

Another element that makes Den Boschwachter such an airy residence is the fact that the apartment blocks have been ‘pulled apart’ from each other through the use of slits and walkways. “We included about six of these slits in the design. This gives you the feeling that the apartment block consists of free-standing buildings,” Vanhees explains.

Iso-Façade as a practical solution

Since the buildings were linked with walkways, there were many thermal bridges. “In this case, we didn’t use thermal absorbers. The contractor opted for the most practical and simplest solution: Iso-Façade. This system was also ideal for the many recesses, nooks and crannies in this project. The extra cost of the Iso-Façade system actually proved more affordable than the cost of thermal absorbers.” 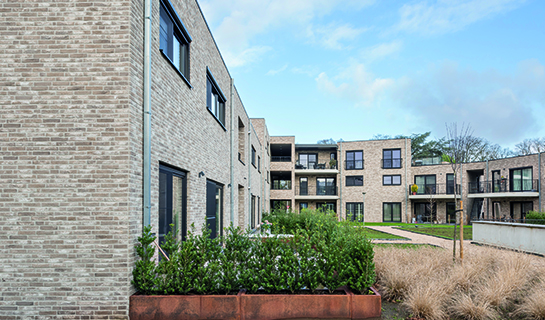 The brick used on the Iso-Façade is called arte. “We needed a soft brick colour that doesn’t stand out too much and blends in with nature. That is why ABP chose arte, a brick with light brown nuances. A good choice, because the building fits in very nicely with its surroundings. It is safe to say we are very satisfied with the result”, concludes Pieter Vanhees. 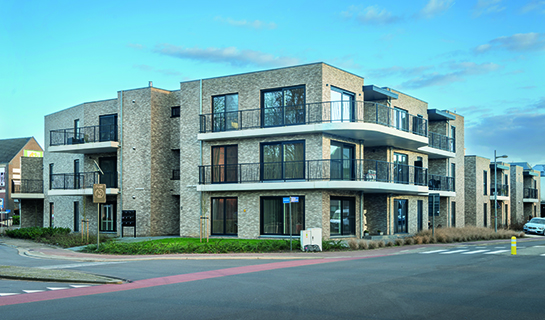 Construction company ABP also looks back on the project with satisfaction. “We are very happy with the facing brick we chose and with the Iso-Façade system,” they say. “There is a wide choice of stone strips and they can be easily processed on site.” So what do people think of the apartment block overall? “We’ve only received positive reactions!”