Nelissen Steenfabrieken has contributed to the social history. So far, in the 100 years of the family business, not a single social conflict has occurred at Nelissen that has led to a strike or the closure of the factory. Many companies in our region could learn a thing or two from this fact. “We have had social peace for 100 years,” admit Gaston Nelissen and Guido Gevers, part of the third generation. They were at the helm of the brickworks in Kesselt for almost half a century.

What is the key to social peace? “We have always had good contacts with the trade unions,” Guido and Gaston state. “Whenever problems arose in the factory or in the office, we solved them immediately on site.” There was also proactive work at Nelissen, as it turns out. “We walked around the factory every day, greeted the workers and had a chat. We listened to what was going on with them. This is how we were able to nip a possible conflict in the bud quickly and adequately and without grumbling.”

“We knew everyone who worked for us by their first names and we addressed them accordingly. And they could address us as Guido or Gaston without any problem. More than that, we insisted. There was no distance between us and the employees; we didn’t want any either. We considered them to be part of our family. The bond with the employees and management was close and well maintained through various activities. Including the annual Christmas party at which the staff were pampered along with their sweethearts, fiancés, or married partners. We also went on weekends to Paris, Rome, and London together with them. They were memorable trips for which the employees and their respective companions did not have to pay a cent. More than that, they even got a pocket money. These three weekends are still talked about, remembered, and shared today,” Guido and Gaston continue. 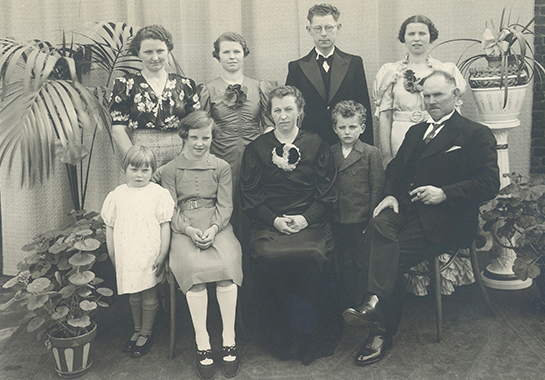 Julien Nelissen (bottom row, fourth person): “I was seven years old at the time, and he told me to go be a lookout in the street and let him know when cyclists were in sight."

Although social peace prevailed, two strikes threatened to bring the brickworks to a standstill. But they stood strong in the face of adversity. Julien Nelissen, the youngest son of the brickworks’ founder and his only surviving descendant, remembers an incident in the 1930s. “My father had found out that there was a general strike going on in Wallonia. And the strike threatened to spread to Flanders. He had heard that militants from the trade union wanted to come from Liège to Kesselt by bicycle to convince the workers here to stop working. How and from whom he had heard that, I don’t remember,” said Julien, a still very fit man of 90. “I was seven years old at the time, and he told me to go be a lookout in the street and let him know when cyclists were in sight. When the militants showed up, they had a red handkerchief around their necks, and I ran to my father as fast as I could. He headed off the delegation and was able to prevent a strike in the brickyard. Father was a gifted speaker.”

A second threat in Nelissen Steenfabrieken’s century of history happened in December 2018. A national strike broke out. The trade unions set up a strike post at the factory. Just 19 of the 140 employees working at Nelissen at the time joined the strike. But the factory didn’t shut down. The production ran as it did on other days. Burt Nelissen, Joeri Gevers, and Carlos Jorissen, who, as members of the fourth generation, now run the brickworks and keep the social peace, just like their predecessors.
Actions
Stories
Did you know…