Project in the spotlight: Dubio in Sint-Truiden 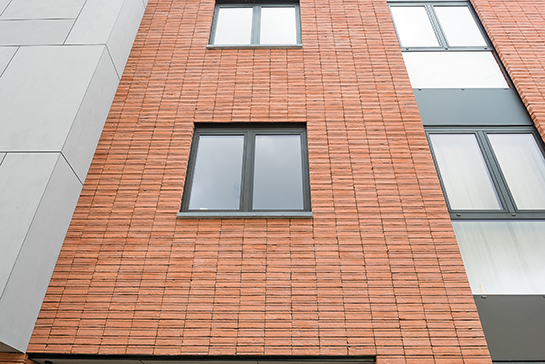 The name already gives it away: Dubio, with its visually intriguing weathered joints, is a brick that makes you look twice. One person who clearly didn’t have to look twice was architect Tom Preuveneers, who went for the Dubio Rosso as the facing brick for the design of a block of flats on Sint-Truiden’s Molenstraat. And the end result looks absolutely fantastic. ‘The Dubio lifts the entire building to a higher level’, the architect says. 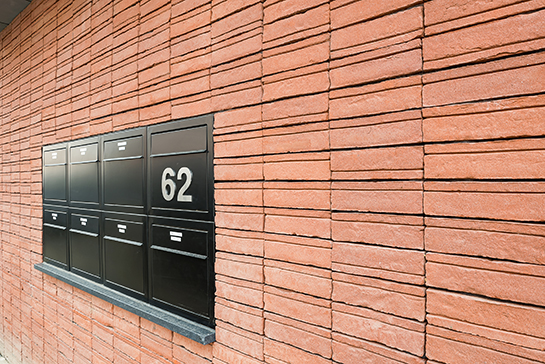 The new building is a block of seven flats, located between the train station and the Sint-Truiden town centre. It consists of four spacious single bedroom flats equipped with a garden or large sun terrace, two two-bedroom flats with a large sun terrace, and a penthouse with lift facilities. Client Immo Chalu set the bar high. The newbuild needed to stand out from an aesthetic perspective. And that’s what it does, in part thanks to the Dubio, the brick designed by product designer Roel Vandebeek on behalf of Nelissen. ‘It needed to have a little more of the aesthetic about it’, says architect Tom Preuveneers. ‘I was familiar with the Dubio and the building owner had discovered it at Batibouw. When it turned out that the contractor was also TOTALLY on board, we started constructively brainstorming about it.’

The most important choice that had to be made was between the Dubio 1 (1 weathered joint) and the Dubio 2 (2 weathered joints). Tom Preuveneers: ‘The decision was made for the Dubio 1 Rosso and that was an aesthetic choice on my part. The Dubio with two weathered joints would be too much and too busy for the stack bond used here.’ What’s striking is that there’s no recurring pattern in the facade. ‘A conscious decision’, says the architect. ‘The order was to stack every brick in the same position it’s picked up in, randomly. That’s led to an incredibly lovely, random pattern. Stack bond requires additional masonry reinforcement, but the effect created here is most assuredly an added value. 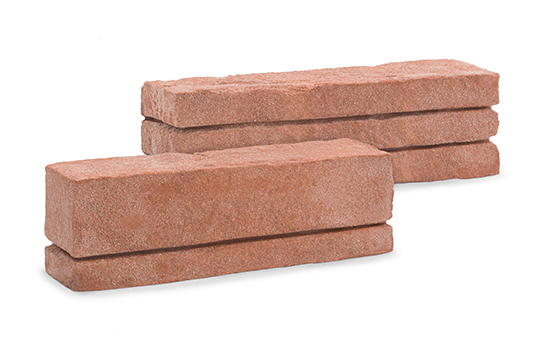 ‘The rear facade was less suited to stack bond due to the window openings. A stretcher bond was selected for that reason, where the weathered joint runs the entire length.  ‘The result is that the brickwork on the rear facade has a different character than that of the front; however, it is precisely that weathered joint that gives it a slightly more stylish edge’, clarifies Tom Preuveneers. ‘The particular design and the sizes of the fibre cement board ensure that there is no clash between the two brick bond types and that they harmoniously integrate without it being “too much of a good thing”.’ 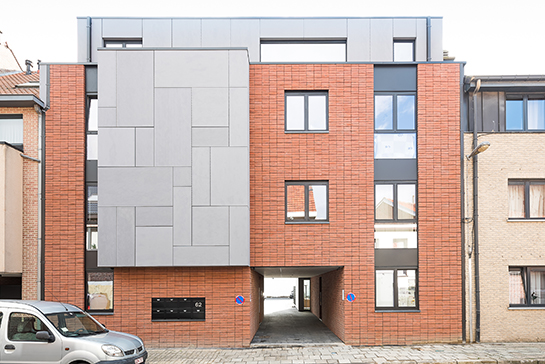 And it’s exactly that which makes the Dubio such a fantastic option. The possibilities are endless. You can create patterns and even mix Dubio 1 and Dubio 2. However, for the block of flats in Sint-Truiden, random stacking turned out to be an excellent choice. Tom Preuveneers: ‘I’m incredibly pleased with the end result. The Dubio Rosso showcases fantastically on the front and rear facades. My first professional experience with this brick was absolutely a success – definitely when combined with the other facade materials used, such as the black steel balconies at the back and the Eternit Tectiva facade cladding on the penthouse and the front facade. When designing where the panels would go on the front facade, I got to let my inner Mondrian out (laughs).’ 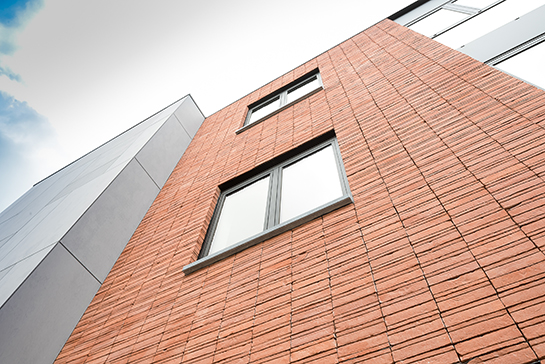 At Molenstraat 62, it’s not just the front and rear facades that have been decked out in Dubio. The passage from front to back was also clad in Dubio. Iso-Façade – a total system for newbuilds and renovations alike – was selected for the cladding, immediately making it possible to insulate the facade in one go. Tom Preuveneers: ‘On top of that, the minimum thickness of the strips (2 cm) gains you another 2x5 cm of space for the passageway. That was no small bonus, given that the space was limited. And at the same time, the brick slips nicely extend the look of the front and rear facade through into the passageway. Everything looks like a cohesive whole.’ 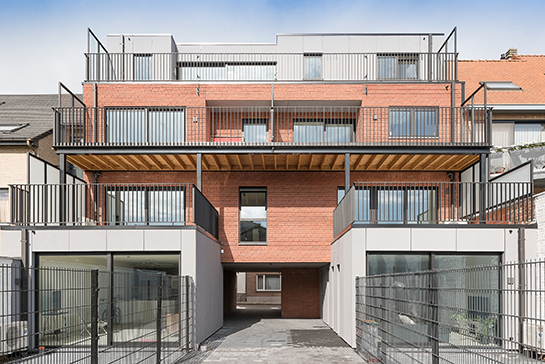 The Dubio doesn’t just ensure an aesthetically pleasing effect, but immediately also sets the bar higher for the rest of the building. The message we get is that, ‘The brick’s added value ensures that the other materials and finish are also a cut above in terms of sophistication and calibre’. And the building radiates that. As a result, it also shouldn’t come as a surprise that the six flats and the penthouse were let in no time. Tom Preuveneers: ‘Chalu is a company that takes excellent care of its tenants. The finish is first-rate and they’re also cutting-edge in terms of technology, which includes, among others, the installation of heat pumps and an E-level that can handle the next evolution in standards. As an architect, I’m also working on this. And that’s also why I think the Dubio’s availability in a depth of 7 cm too is such a huge added value. I prefer an extra centimetre of insulation to an extra centimetre of brick.’ 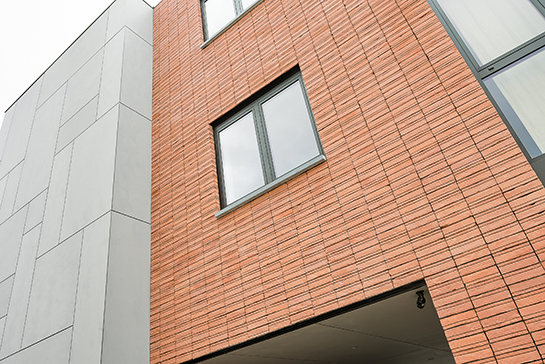 However, the brick’s shallow property, combined with the weathered joint, makes the Dubio a brick that has to be handled with due care. ‘The contractor also made sure his team could handle this aspect’, says Tom Preuveneers, emphasising the unique character of the building. ‘This is the first true street scene project using Dubio, so it’s definitely a reference – both in terms of appearance and execution. Building owners are traditionally fairly reluctant to go for something new. This project is absolutely a “trigger” in that respect. In any event, the responses have been incredibly positive, and I’m especially chuffed that everyone has done their best to showcase the brick’s inherent value. The Dubio lends this block of flats a sense of daring and toughness, without being domineering. I have no doubt that I’ll use Dubio again in the future.’ 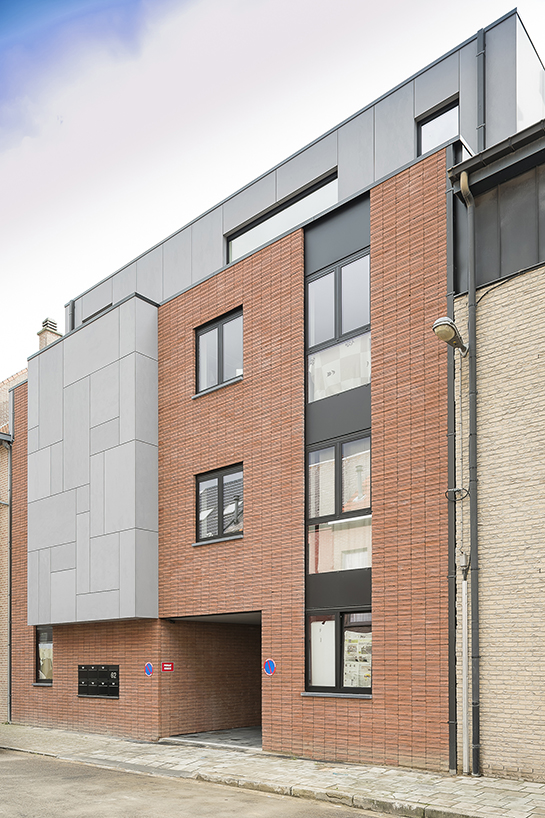